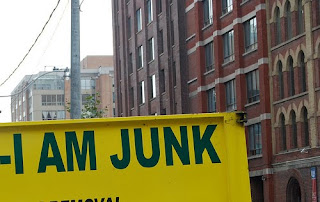 During this challenge, I'll be giving you lots of hints for how to boost your confidence--ways to focus on what works.

But before you can focus on what works, you have to let go of things that don't work.

So I'm aiming to do one post a week targeting confidence killers--those behaviors we don't even realize we're doing that are undermining our professional confidence.

I see this every day. Almost every time I talk to a new freelancer, she's mired under a metaphorical pile of magazine articles and newspaper articles that are Better Than Her:
It goes on and on. Some writers are so hampered by this comparison thing that they spend hours in the name of "research" looking at other writers' Web sites, or following one writer's byline. There's an easy way to understand this, at least with many women: How many times have you found yourself comparing your body to someone else's? Don't you imagine that other woman's love life is better, her life easier, because of her body? If you asked her, I'd be willing to bet she has the same problems as the rest of us.

Regardless of whether the struggle is bodies or bylines, with every minute spent, you feel further and further away from your goals. Chances are that the goal isn't really to be published in this magazine or that--though that's always appealing. This magazine or that award is a symbol--just like having a certain body is a symbol. It represents the life you'd like to have: You'd like to have happy relationships and respect, and you think the body is a way to get there. It certainly seems easier than learning relationship skills and making mistakes and being assertive enough to correct people when they treat you poorly.

Likewise, this award or that byline is a symbol for doing the kind of work that feeds your soul and fills your bank account. Fixating on this publication or that award is a sign that we're getting professional success, that we've burned through some of our fear and are realizing our true creative potential. That's what we really want, deep down.

That crazy voice in the back of our heads (Seth Godin would call it the lizard brain. Steven Pressfield would call it The Resistance) gets louder and louder, informing us that that other writer has some essential spark we lack.

It's exhausting and keeps us further and further away from trying.

This tendency exists completely separate from reality. I can let myself get into this mode if I'm in a certain frame of mind and pick up a New Yorker. I think, "I'll never meet my goal. I should just give up. I should stay where I'm at now. Best not to risk it and humiliate myself."

The ironic thing is that looking at me from the outside you wouldn't expect it: I went to the best journalism school in the country. I have years under my belt working for newspapers. I've won a few awards. I've been supporting myself as a freelancer for years.

There's an old saying, "Don't compare your insides to someone else's outsides."

But I actually would take that one step further: Don't compare your own insides to your own outsides.

The fact is that we are forward-looking. We're ambitious. Which often means that as soon as we've accomplished something, we disregard how hard it was, how much of a risk it was to try, and what courage and confidence it took to do it.

So try this, when you find yourself seeking into compare-and-despair:

Make a ta-da list.
Sit down and make a list of all the things you've accomplished--today, this week, etc. Include things like sleeping enough and being kind when you were irritable. Include showing up for your job. Include one risk you took.

I know it sounds beyond New Agey and ridiculous. But you need facts to counteract what your crazy doom-and-gloom voice is laying on you. You need to remember that you have accomplished things--maybe more than you ever really expected.

Step away from the computer.
... or the newspaper or the magazine. If you're in that frame of mind where you're feeling insecure and comparing your accomplishments to someone else's, no amount of reading or muscling through will help. Take a break and come back to it after the ta-da list, after you've renewed your confidence.

Talk to other writers.
This touches on another tip I'll be giving next week, but you need to run your doom-and-gloom voice past others in your field. Ask them: Do you ever feel this way? You'll be surprised to learn that even the most accomplished writers are insecure and worry about reaching the heights for which they strive.

Then, when you're done: Try. Just try. Do one small thing that's intimidating and then give yourself credit.

Photo by Marc Lippe.
Posted by Heather Boerner at 6:00 AM