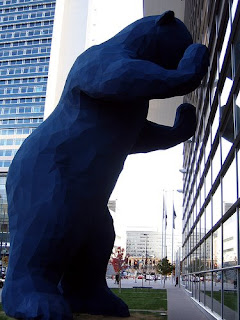 One of the things I loved about Jacqui Banaszynski's recent guest posts on this blog is how frank she was about the challenges of looking like you know what you're doing and feeling the opposite. In the post on fear of seeming rude when you do the kind of persistence that leads to great stories, she said:

[T]he discomfort with self-promotion is very familiar. The same mother who taught me to hold my own in a sibling tussle also taught me that it’s bad manners to go bragging on yourself. And yes, she taught me to mind my own business, not be nosy, not pry into others’ affairs, etc.

Quite the dilemma for journalists, yes?

I’ve known a lot of journalists in my time who are flat-out hustlers, and I say that with admiration — perhaps even envy. They can charm, schmooze or bully their way into almost any situation and come out with the goods.

Not me. I’ve always believed — sometimes naively — that good work will get you noticed; and if not, good work should be its own reward. I also tend to lean more towards doing what works for the bigger group than for my own “score.” (Studies indicate that may be, in part, a gender-based tendency.)

I bring this up in particular because a coaching client of mine recently admitted that part of her hesitance to query had to do with feeling like she should be at a different point in her career by now. She described her main newspaper job as being with a crappy paper. She's been a full-time mom for several years now. How can she compete, she seemed to be asking, with people like me, who went to journalism school, worked at lots of papers, and is established?

What I told her is similar to what Banaszynski intimates above: Guess what? We all feel like we don't belong.

To illustrate, I told a story:

I went to Columbia Journalism School. Fancy, right? The best journalism school in the country. You'd think we'd all be walking around possessed of a level of confidence not experienced by mere hacks. We were the chosen ones, those who, the school's administrators constantly reminded us, would Save Journalism For The Next Generation.

You'd think that, and you'd be wrong.

Instead, there was a joke in the school: In our yearbook (because, in addition to being journalism nerds we were regular nerds as well), writer and former stand-up comic Barry Lank wrote a humor piece about how he didn't deserve to be at the school: Some guy named Bernie Link, or something, was out there somewhere, wrongly denied his spot at the illustrious school.

It was like the whole school had a case of impostor syndrome.

And it's not isolated just to students. Recently, on a professional freelancers board I frequent, someone posted a question with the title: "Do You Ever Feel Like You Just Don't Know What You're Doing?" The question got 13 responses, often with the reply, "All the time."

So if you're struggling with your right to be part of the group that calls itself full-time freelance writers, I'll tell you a secret. Feeling insecure is almost one of the requirements for admission. Just know that everyone is trying to find the next assignment, the next gig, the next piece of work that's going to make her career path make sense.

We do this job despite the fear, not because we're free of it. Maybe there's some level at which that fear is removed, but I haven't found it yet. I'd be willing to wager that the writer you most envy has his or her bouts with the same insecurities. There's always someone more honored out there to which we can compare ourselves.

So let's apply the serenity principle to this: If serenity comes from letting go of what you can't control and focusing on what you can, then feeling like you don't measure up definitely falls into the former category. It's antidote?
Get into the groove.

Finding and working on a query and a story you love--getting out of your brain and into your subjects' lives will--remind you that, though you may feel like you don't belong, you are exactly where you're supposed to be. The job will start making sense. You'll see that maybe you have something to contribute after all.

It's the thinking about it that bogs us down. So don't think. Do. Whatever's next on your to-do list, just do it. Get excited about your job. As Richard St. John said in one of the TED Talks I posted yesterday, passion and getting into the flow is key to success. Enjoy it.

Photo by TimWilson.
Posted by Heather Boerner at 6:00 AM

Great advice. I just attended a seminar for the self-employed, and the woman leading it was stressing the importance of being your own bold advocate. As she said, "Humility: Save it for another day!"

Awesome, inspiring! Telling ourselves we can't compete against XYZ is so seductive, because it sounds so logical, but isn't.
Thanks Heather,
sara

Tweeted about this post the other day and received this message from a friend.

"Great link to the blog by Heather Boerner. Hit the spot today!! Thanks."