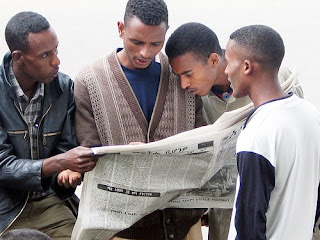 Most writers will tell you they don't know anything about brands: That brands are the Warhol soup cans--devoid of any real substance, all style. Brands, in other words, have nothing to do with what you do.

It's not that writers are lying. It's just that we can't think of anything we respect that's part of a brand.

Here's something that I hope will change that thinking: If you've been a newspaper reporter or worked at a magazine or trade publication, you know all about a brand. You've lived it. It was your publication.

Think about it: The New York Times has a very different brand than the New York Post than The National Enquirer than The New Yorker than Body + Soul than Ladies Home Journal than Slate than Gothamist.

We get that intuitively. But what's the difference, really? They're all publications. They're all words printed on paper or splashed across a Web site.

It sounds like a dumb question: What do you mean what's the difference between the National Enquirer and The New York Times? That's the stupidest thing I've ever heard.

But why? Because the New York Times is "all the news that's fit to print" and The National Enquirer supplies information for "inquiring minds." But they both purport to tell stories about people that are true. They both make corrections. They've both been sued for libel. (And, of course, some would argue that there's not enough of a difference between the Old Grey Lady these days and gossip magazines, but that's another conversation.)

The difference is that they both purport to do something different and they approach what they do with a different style: The New York Times spends a lot of money on very good editors who spend lots of hours shaping stories that are up to their standards. They fact-check. The National Enquirer--well, I don't know much about the National Enquirer, but I'd be willing to bet that they don't spend their money the same way and they don't want deep, thorough stories. Their Web sites look really different from one another: The New York Times looks closest to a newspaper of almost any newspaper Web site. The National Enquirer has huge photos and splashy headlines like "The Grace Kelly Curse Strikes Again."

Those are not mistakes. They do these things on purpose. The New York Times isn't competing directly with The National Enquirer, though I'm sure they share readers.
What this means for you

But your editors only know that if you don't have a brand:

The examples go on. The point is that The New Yorker's brand is not a coincidence, and it's also authentic to what it excels at. I'd hate to see The New York Times do any more gossip than it's already done. Doing so would confuse the heck out of its readers. And I shudder to think what the National Inquirer would do to thoughtful healthcare reform coverage.

So what are you? How do you show it?

Photo by Terje S. Skjerdal.
Posted by Heather Boerner at 6:00 AM