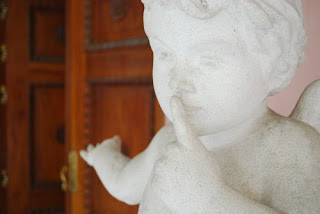 Editor silence. It's the silent scorn of the freelance world.

Or at least it can feel that way when you've spent hours on a query and it disappears into an editors inbox, never to be heard from again. Several freelancers I know do everything they can to avoid querying in order to protect themselves from the paralyzing silence they get in return.

That can be fine--it can force them to develop marketing efforts that involve long-term relationships with clients without having to query, for instance--but it can also be the death knell of a thriving freelance career.

I've said before that I don't really understand what makes a query sell--or what makes an editor respond. I tend to think that the planets have to be properly aligned, the editor must have just the right amount of caffeine in her system and the query must land in her in-box on the day after production has neded.

You can't time their system. You have to create one of your own.

So how to cope with the silence? Here are tips that work for me and other freelancers:

Some freelancers swear by simultaneous submission. Send the query to five or more different editors at once and you increase your odds of selling the piece, or at least getting a response.

To do this, research the publications you think would be a good match for the idea and find the right editors' email addresses. Make sure not just to copy and paste the idea into five separate email windows and press send. Each should be tailored to just the right tone and audience for the publication at hand. One query may become a service piece. Another a feature. The point is to increase your chance of a response and to make the sale.

Have one in the hopper.

Some publications forbid simultaneous submissions--and it's never a good idea to send queries to competing publications at the same time. If that's the case, I tend to have the next publication picked out and ready to go when I send the first query. That means the query is ready to go, in the Drafts file in my email program. That way, if the answer is no, or if I hear nothing, I get it out again right away.

I feel good, because I know the idea is out there, trying to rustle up some work.

Move on to the next great idea.

Constantly refreshing your email program is the business equivalent of waiting by the phone for that dreamboat to call. So distract yourself with something else that might even be dreamier (comments about my approach to dating should be sent to private email...) Sure, we all get attached to ideas we think are great. But it's harder to pine for one editor's answer when you've got 10 or 20 queries floating out there in some stage of development.

Take action:
If you're busy enough doing that, you won't have time to wonder why That One Query doesn't call or write, and why the editor doesn't either. Get cracking on something you CAN control.

Querying isn't just hitting send. It's following up and up and up. If you haven't heard back for a while, send a follow up asking if they're interested or not. It's simple enough.

If all else fails, accept the silence.

Some editors just won't ever respond. They're swamped, they're disorganized, they're non communicative. And your query may be off base. But until they develop a telepathy app at the iTunes store, you'll never know.

Take the silence as a no and move on. Remember that it has nothing to do with you. You may have fallen in love with the idea and become attached to it, and that's great. It's a sign of how much you love your work.

But silence isn't a repudiation of your idea. It's nothing. Literally.

What do you do to cope with editor silence?
Posted by Heather Boerner at 6:00 AM

Great post, Heather. Especially about silence being nothing. I'm burning that one on my brain. :-)

Any comment on when it's a publication you've been published in consistently for several months & then suddenly..... silence??