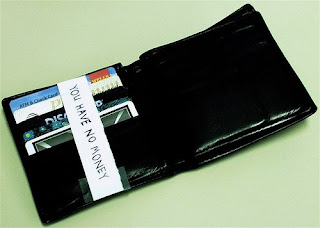 In my experience personally and with other writers, one of the hardest things to do is keep track of our spending--which makes all the other tools useless. After all, we can't work toward putting 30 percent of out income toward cashflow or savings if we don't know how much we're making.

I know. I spent years drafting budgets in Excel, only to abandon them almost immediately. For me, a budget is like a diet--all about what you should be cutting out instead of what you get to eat. So a key to my financial solvency is to draft and follow a spending plan every month.

I'm not the first to talk about this. Lots of other bloggers and financial minds have covered this topic. And clearly I don't know what will work for you. But for me, a spending plan is the answer because I'll do it--and I won't do a budget. I've been keeping a spending plan and tracking my spending for about two and a half years now, and it's contributed greatly to my serenity by showing me where I'm spending my money and what I value. Plus, knowing how much I need to make based on spending gives me the motivation to earn more because I know what I'm getting for the money.

Here's what I love about a spending plan:
Obviously, your mileage may vary. For those without such an emotional connection to money, a budget I'm sure would be fine.

Recently I sat down with a writer friend and helped him create a spending plan. He'd never had one because he thought he first had to increase his income. While increasing income is a noble goal, creating the spending plan actually gave him joy. He got to see that even on his small income, he could put a little away for reserves and even have some things he really wanted but didn't think he could afford, like accessories for his bike. It was great to watch the spending plan create some space and breathing room in him.

Tomorrow, I'll share how to create a spending plan.

Photo by Jeff Keen.
Posted by Heather Boerner at 6:00 AM