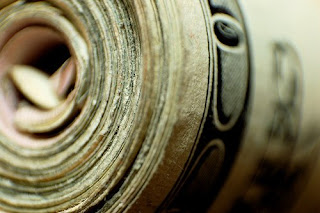 So often on freelance boards, writers pose the hopeful question: What do you do to bring in more money this month? We aren't talking about raising your income in the long run. Sometimes, you just need money now.

There are a few options, but proceed with caution: These suggestions are not a replacement for a business plan or a marketing plan. You will not last as a freelancer if you try to use these suggestions to keep your business afloat. They are stop-gap measures, and as such take you away from the focus you've created with your plan. As writer Merydith Willoughby replied when I posted this question on LinkedIn:

Writing has to be considered a business: You will have to make your mark in the particular genre you write in, be excellent in your field and work your butt off to make links, contacts, etc. Once you've achieved all that, yes you can achieve your goal. It takes time, hard work, years, stamina and patience and a willingness to always improve what you are doing. Other than that, yep - it's easy.

The other bad news is that there aren't many options that both pay well and pay quickly. Usually you get one or the other. What's that old saying? "I can do it quickly, I can do it well or I can do it cheaply. Choose two." The same usually goes for freelance writing, only instead of choosing between cheap and fast, you're choosing between well-paying and fast.

Having said that, here's what my LinkedIn colleagues had to say:

In Six Figure Freelancing, one of the things Kelly James-Enger impresses upon new freelancers is that it's important to just get a stream of money coming in. For her, it was writing for hospitals. For me, it was doing movie reviews and advertorial. Sure, they paid terribly and took up a bunch of my time, but I like movies, and they paid a week after I turned in the reviews.

This is what freelancer (and full disclosure: friend) Vanessa Richardson does. "[My way of making money quickly from writing] is writing a lot of blog entries for this AOL website that pays little but at least pays on time."

Finding these can be relatively simple. Low-paying work is available on Craigslist, MediaBistro and elsewhere. The key is to keep it a small part of your income stream and your time commitment so you don't fall into the trap I did: Spending so much time doing low-paying work you don't have time to query higher-paying markets. If you've managed this, I'd love to hear about it.

If you're a decent editor and can get your hands on a Chicago Manual of Style or other style guide, you can post signs around local universities, advertising your editing skills for students needing help with their essays. You won't make $1/word rates, probably, but you will make a decent amount to fill the gaps.

Or, go more global with your teaching. Rob Duncan, keynote speaker and self-described "innovation catalyst" suggests you "teach others how to write through college night courses, seminars, the Learning Annex, webinars or paid speaking gigs. Plug your nose, and sell the dream!"

The same goes for this idea. Dave Gardner, a writer and editor with 27 years experience has a lot of practice "getting new jobs after others go south." This is one of the ways he does it.

"I've been helping folks with their resumes and cover letters," he says. "The economy makes resumes and cover letters something a lot of folks need. They need them now, they pay quickly, and they appreciate what you've done for them. It just takes a little advertising (a flyer at the local unemployment office and at the temp agencies works well) and networking when out and about."

"There used to be a guy in Chicago who would set up his manual typewriter on a street corner and write a 2-minute novel about your life," says writer Bob Rosenbaum. "He'd ask you about five questions and then bang out two paragraphs about you with a beginning, middle and end. All for whatever amount you wanted to put into his typewriter case."

What I didn't include
You may have noticed that I didn't include those freelance boards where you compete with other writers to land short-term assignments. That's because I consider them both not writing and not useful to any kind of freelance writing business model. Think about it: It's about stringing keywords together to lure eyes to ads, not writing. And for the pleasure of doing work that isn't fulfilling, you'll get to compete with other freelancers, drive down the price, and usually pay some kind of monthly fee. That's not worth it, and I'm willing to bet you deserve better.

Have other writing-related ways to make quick cash? Share them in the comments.

Photo by zzzack.
Posted by Heather Boerner at 6:00 AM

Thanks for these ideas, Heather!

I especially like your tip about not falling into the trap of focusing on smaller-paying markets, while neglecting larger ones. It may be smarter to turn down those low paying jobs, and focus on developing tight, excellent queries for bigger markets....but it depends on your financial situation. I think it's a worthwhile investment (to chase big markets), but if you have immediate bills to pay...maybe sticking with the "tried and true" is better for the short-term.

Another possibility is asking your low-paying gigs to up the ante a bit. I did that once, and it went over like a dream! Perfectly.

Very interesting stuff to chew on....